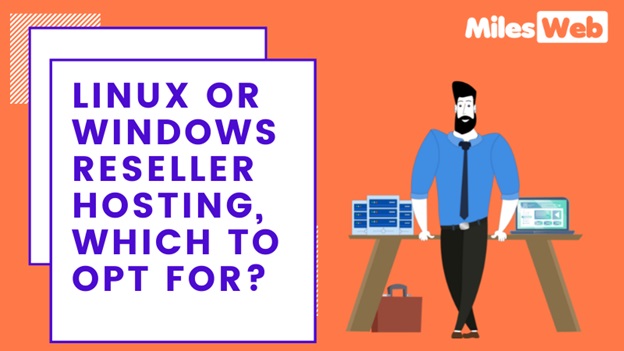 Starting a business as a web hosting service provider is always a great choice to make. If you think you need a large investment in initiating a web hosting business, which is certainly not true.

The entrepreneurs are investing in the growth chance by beginning their own company of reseller hosting to either generate a maximum income flow or to complement their brand. Reseller hosting is well suited due to its overall simplicity and low initial costs.

Both Linux and Windows are excellent choices for getting your reseller hosting company off the ground.

Linux has more demand than the other when it comes to choosing hosting amongst Windows and Linux resellers. Linux reseller hosting uses an open-source operating system. It is backed by a lively group of developers who keep it up to date with the new features and innovations due to its open-source design. It is less expensive, easier to scale, and provides a higher degree of protection, but it has a longer learning curve. Linux can be configured to provide better performance by a developer.

There isn’t anything a Linux server can’t do; in truth, as a new user, you’d be hard-pressed to come up with an excuse not to use one. There are a few applications that include Linux OS only.

Linux is a very stable, reliable and secure platform that is used by millions of people all over the world.

A reasonable bandwidth allocation allows websites to load quickly, which is just what your customers want.

As a reseller, you’d like to be able to manage and monitor a variety of client accounts. As a result, all you need is a simple control panel.

In comparison to Windows, Linux reseller hosting is common because it supports a broad variety of programming languages. Users and business owners approve it because it provides a range of options. The languages provide a variety of types, ranging from CGI simple script support to higher-level programming languages such as Perl, PHP, Ruby, and others. However, in the case of Windows, the options are restricted to a few Microsoft-developed languages such as ASP, .Net, and others.

How you get access to the host determines how you use Linux reseller hosting. Both Linux and Windows provide FTP access; however, in the case of Linux hosting, advanced options such as VNC, Telnet, SSH, and others are available. Many of these are difficult to locate in Windows.

Since Windows is owned by Microsoft, it is compatible with a variety of Microsoft applications and software. Webmasters can develop their websites more easily, interactively, and efficiently if they are familiar with Microsoft applications and tools. Running Windows servers is also less complicated because it comes with well-designed features that help you to manage your websites. These Microsoft features provide dependable end-to-end server management, making Windows hosting simpler to manage.

Apart from Microsoft product compatibility, Windows hosting comes with a wide range of support from several Windows components. Websites that run on Unix-based systems, for example, can be hosted on a Windows-based server. The windows hosting control panel is essentially clustered and makes use of Microsoft’s active directory technology.

Many of the Linux panels are used in Windows, which also has its own set of panels. As a result, Windows hosting is extremely cost-effective. Furthermore, websites designed for Linux hosting can be easily migrated to Windows.

If you’re on the fence about getting Windows reseller hosting, you should keep in mind that it’s at least as capable as Linux in terms of web hosting. Don’t be fooled into thinking that Linux is better than Windows. Windows hosting is just as profitable, reliable, and affordable to use since everyone is familiar with this type of platform, it is easy for both novices and experts users to maintain various tasks.

Knowing about the difference between Linux and Windows reseller hosting plans you can surely make a good decision regarding which one you can opt for.

Linux reseller hosting will provide you with more customizations and control over your hosting’s settings. If you don’t like fiddling with settings and prefer a collection of pre-configured procedures, Windows reseller hosting is the way to go.